The Role of Family and Friends

Family and friends often play an important role in supporting loved ones with mental health problems but at times they are the cause of unintentional stigma and discrimination.

If you notice a loved one acting differently then it may be a sign that they are experiencing mental health problems and need your support.

Those we have the strongest bonds with might notice that there is something wrong first but don't feel offended if your friend or family member doesn't feel comfortable in sharing it with you.

Self-stigma makes it more difficult to engage and ask for support, particularly from those closest to them.

Our research found that people are most likely to experience stigma and discrimination from family and friends, so it’s important to make sure that you are as supportive as you can be.

If you find a friend or family member doesn’t want to speak to you, let them know that you will be there for them if they do want to speak. Don’t take this isn't as a personal insult as many people react differently and may wish to confide in a professional, another friend or might not be ready to talk.

Don't focus on the negative aspects of mental health problems or show that you are scared or intimidated as that will become apparent. You are also likely to need to talk to someone about your fears and concerns and that’s OK. It's more than likely that family members or friends will want to share how they are feeling with someone they trust. They need to be ready to do so. 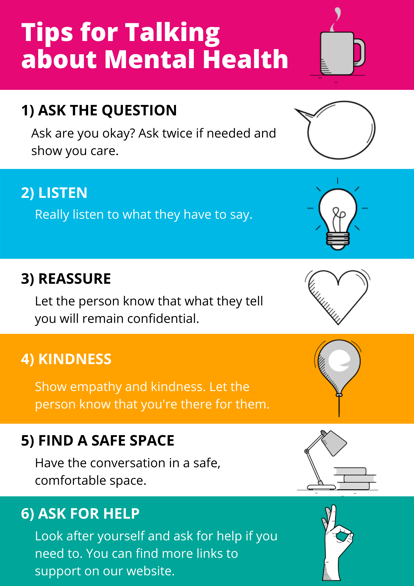 How to help someone experiencing a mental health problem:

Speaking to your children about a mental health problem:

“When my daughter started behaving erratically, became increasingly withdrawn, stopped going to work, spent days in bed, crying and sleeping, I didn’t know what to do. I understood she was in a bad place but I also felt frustrated and scared as I had no control and 'couldn't make things better'. She didn’t want to talk. I learned that confrontation was bad for both of us and only made things worse. What I didn't appreciate was that some things I said had a major impact on her self-confidence.

In the early days I kept trying to take over but now understand that she needs her space and has to make her own decisions – even if I don’t always agree. That is a big thing for her - feeling like she is taking back control. I now accept that as long as she doesn’t put herself into a dangerous situation, that mistakes she may make along the way and differences of opinions are OK.

I realise that it was important not to take things personally – recognising that often it was the illness talking and some of her behaviour was out of her control. She now understands that I care and am only trying to help."

Anyone can help tackle stigma and discrimination. You can do as little or as much as you're able to and every action makes a difference.