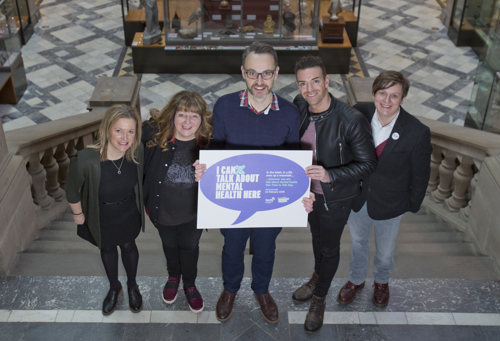 TWO thirds of people in Scotland (67%) feel they have no one to talk to when it comes to personal conversations on topics such as mental health, money problems and relationships.

To change this footballers, actors, comedians, activists, even the First Minister have come together to show that we should all be able to talk about mental health anywhere.

The new figures, released today (FEB 1) as part of Time to Talk Day, show a similar issues across the UK, with 66%[1] feeling like they have no one to talk to. When asked why, the top reasons were people said never being able to find the right time, or the right place.

The survey of 2,500 UK adults was commissioned by Time to Change, who are working with See Me, the Scottish programme to end mental health discrimination, for a nation-wide push to get people talking more openly about mental health.

This year marks the fifth Time to Talk Day, but the first time that all four UK nations have come together, with Time to Change Wales and Change Your Mind in Northern Ireland also joining, with the theme of Right Time, Any Place.

Time to Talk day also falls on Breathing Space day this year, and the launch of their campaign, 365 Brighter Days, designed to offer a year round approach to positivity.

In the build-up See Me champions, Suzanne Baines and Karen Lally travelled around Scotland, starting conversations at Ben Nevis, Loch Ness, St Andrews Old Course, Stirling Castle and the Falkirk wheel. Their trip finished with a visit to the parliament to chat to First Minister Nicola Sturgeon. 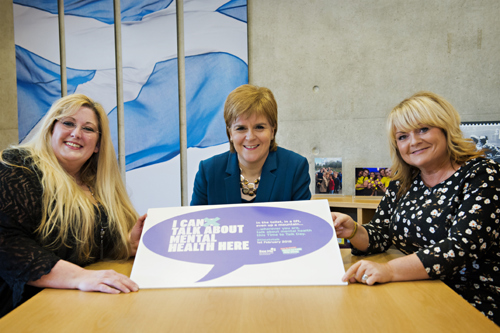 “We want to create a Scotland where all mental health stigma and discrimination is challenged. No one should be made to feel ashamed or isolated because of their mental health.

“The work of See Me – and their Time to Talk campaign in particular – are hugely important, as they encourage people to have a conversation and open up about mental health issues.

“So if you are worried about someone, show you care by taking the first step. Start that conversation and ask them if they are okay.”

Comedian and presenter Des Clarke and comedian Janey Godley spent the morning at Kelvingrove Museum in Glasgow chatting about mental health, footballer David Cox has been talking in his gym in Motherwell with See Me volunteer Liam Rankin and actor Emun Elliott videoed himself chatting with a pal. 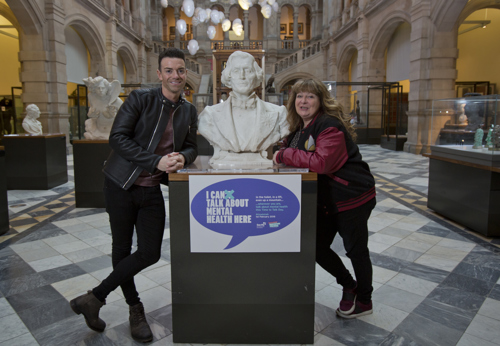 The day will kick off at The Lighthouse in Glasgow where, people can join See Me and MSP James Dornan, who has spoken about his depression before, to show that conversations can happen anywhere, even overlooking the whole city.

Millions of conversations are expected to take place on the day, with over 2,500 workplaces hosting their own activities including Virgin Trains on their lines between Glasgow and London.

Liam Rankin, 49, from, East Kilbride, was first diagnosed with schizophrenia when he was a teenager, but was told not to talk about what he was going through.

He said: “I always thought I couldn’t tell anyone about my schizophrenia, that it wasn’t something I should talk about. So I ended up self-harming and overdosing to try and get people to ask me how I was. If no one asks you how you are then it is so much harder to talk about it.

“I grew up in a generation when this was a treated like a dirty secret. I felt really isolated, when you can’t speak about what’s going on you lose everyone, you don’t think anyone will understand.

“If I could have spoken out and got proper help when I was younger then it could have made a huge difference. Early intervention is vital and you need to be able to talk to do that.”

However with the help of his mental health team, Liam is now seeing the difference talking can make. He has also involved in a project speaking to medical staff about interventions with people experiencing psychosis.

He said: “Talking has made a massive difference. The more you speak the more you realise you’re not alone and there are people out there to talk to.

“People who experience psychosis really worry about how people will react because there are so many misconceptions.

“It impacts on all your life. It can stop you doing everyday things, like making meals, or washing, or just looking after yourself. Because your focused on trying to beat the symptoms.

“But if I can tell someone this, tell them what I’m going thorough and not receive judgement, it makes a huge difference. For the past couple of years it’s been a bit easier because of my mental health team behind me. I have realised it’s not my fault and I don’t have to be embarrassed.”

Footballer David Cox has experienced depression since his teens, and tried to take his own life on more than on occasion. He said:

“As a teenager I self-harmed and as I got older things got worse for me. I wasn’t speaking to people and things snowballed until I tried to take my own life.

“I’ve come out and spoke about it and it helped me massively. Having a network of people who understand what I’m going through makes things that wee bit easier.” 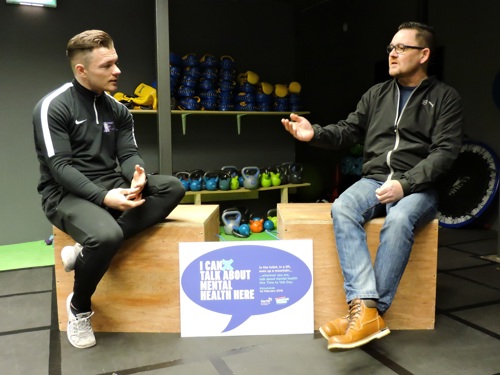 Des Clarke said: “We all have mental health and it should be something we can talk about anywhere. At the moment people still find it difficult to open up and speak about how they are feeling.

“That’s why I wanted to come down and show that even in a museum you can chat about what’s going on in your life and how you’re feeling.”

Janey Godley said: “As comedians we’re used to talking about our lives. But that doesn’t mean it’s always easy to speak when you’re struggling.

“I want to show that it doesn’t matter who you are, or where you are, we can all listen and show there isn’t a wrong place to speak about your mental health.”

Calum Irving, See Me director, said: “It’s easy to think there’s no right place to talk about mental health, but the more we talk about it, the better life is for all of us.

“Too many people with mental health problems are made to feel isolated, worthless and ashamed. Conversations have the power to change lives, wherever they take place.

“This year Time to Talk day coincides with Breathing Space day in Scotland. So we have joined forces to ensure that people talk about mental health today and use this as the first step to practicing positivity throughout the next 365 days.”

Join in the conversation online using the hashtag #timetotalk 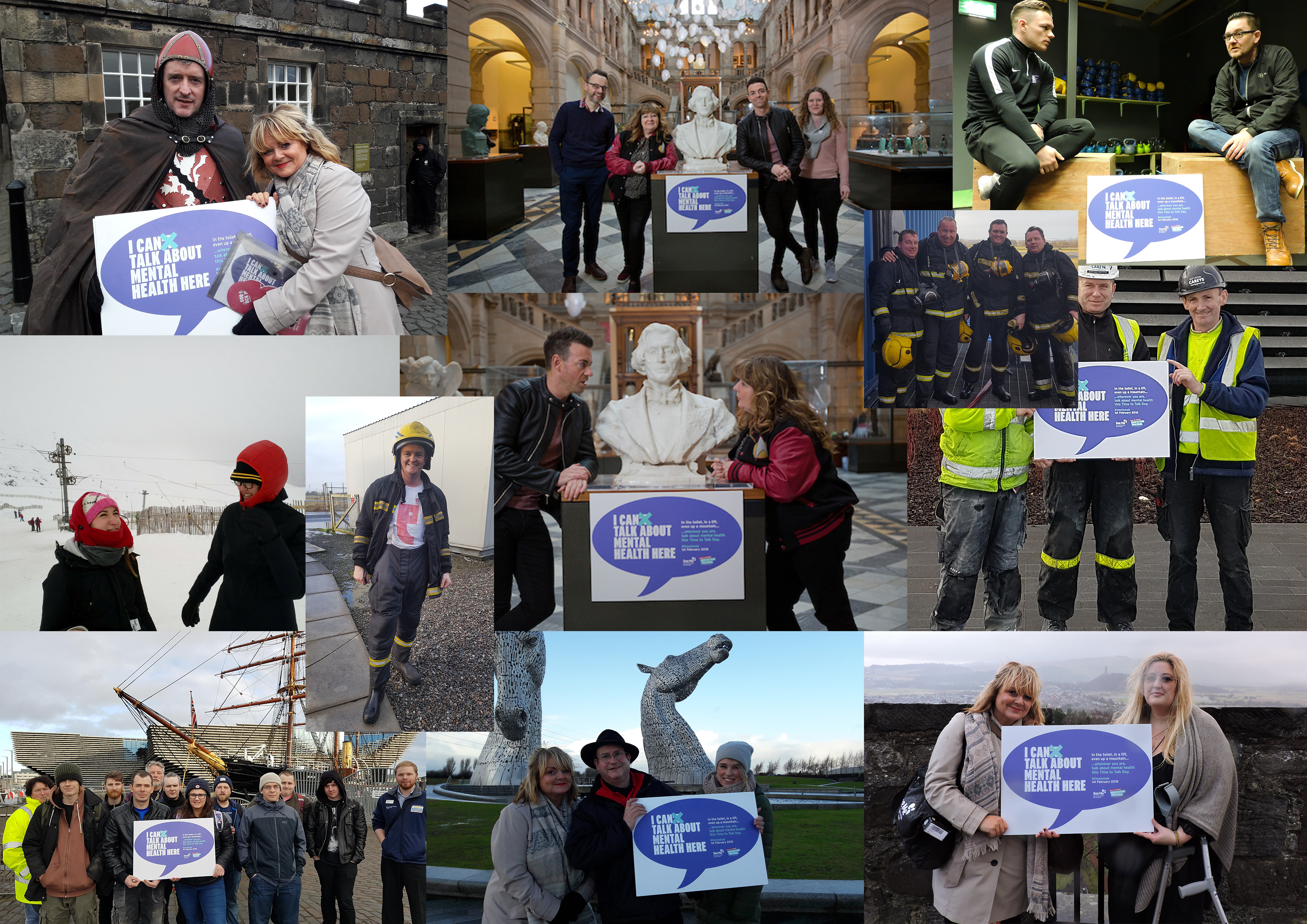 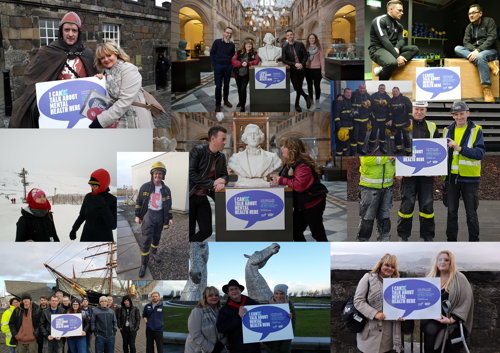