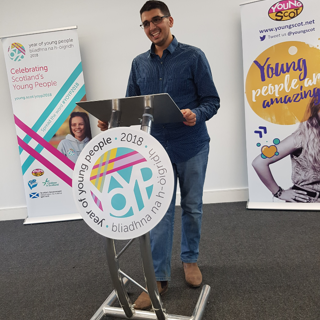 I experienced racism for a decade from primary to secondary school. Now I am working and it still affects me.

It all started one day someone pushed me during lunch at the playground and as I turned around to see who it was, the individual said, and “Go back to your country.” The people around him laughed at that comment. I was confused for the rest of the day as to what he meant as I thought I was in my country. I would eventually forget about it thinking it was a random one-off event. I didn’t realise at that point that it would be a daily event in my life for most of my primary and secondary education.

Even though it would continue and got worse I told no one, not my parents or my teachers, and always tried to dismiss the comments they said. I got called a terrorist which hurt me a lot. I didn’t want to cry because then they would know it affected me, so I also would not show emotions.

My education was affected as I wouldn’t go to school and claim I was sick.

I tried to hide what was happening to me for so long as I didn’t want my parents to worry. I started retreating into myself and had become quieter.

They worked it out eventually. By that point, it had been going on for two years and my mother and teacher were getting curious as to why I was missing school. So, I told my mum.

She went into school to complain and was told by teachers that it will be dealt with. When it wasn’t she had to go in a further two times to plead and nothing would be done.

In 2010 I went to Secondary school feeling happy and positive with the hope that things will be very different and for the better. For the most part that was true – an unfamiliar environment, new people and new teachers and I felt that I could have a fresh start in life without the racist people bringing me down.

My wishful thinking ended when I saw that they were also in the same secondary school and they were with a bigger friend group. When they saw me in the corridors or in classrooms, the name calling would start.  In 2011 Osama Bin Laden was killed and then it just continued to get worse.

All of what happened made me feel like everybody was against me; like they were all talking about me and that they all hated me.

I felt rejected and isolated and it messed with my self-confidence.

Having fewer friends meant more isolation and feelings of helplessness which led me to have depression and suicidal thoughts, which is still affecting me, and it brought on my persisting social anxiety.

It made me think about moving school, but I didn’t feel anything would get better; I’d just be an outcast there like I was at my high school. I was told of this quote that helped me a lot which the great Martin Luther King said once – “Darkness cannot drive out darkness; only light can do that. Hate cannot drive out hate; only love can do that”. That quote always stopped me from using hate against hate and to always be happy and friendly.

I have always wanted to help people and this experience just intensifies that feeling further. So I have also been volunteering for multiple local and national groups which has been greatly beneficial in rebuilding my confidence which was tarnished by the bullies, gaining new skills and qualities and meeting new people. One of the projects I am involved in with Young Scot which is called Fairer Future which is about Race equality in Scotland, locally I was involved in Renfrewshire youth commission focusing on young people's mental health. It also made me have a clear path on what to do as a career which is anything to help more people through public service and at the same time share my story.

When those bullies left school I felt so relieved and happy, things started to change, people would approach me and talk to me in school and through volunteering and from there life got better.

I made good friends who helped me a lot with my mental health and I’m just glad I met them; they have been extremely helpful and supportive.

I’m now working and all is looking good. I’ve met a lot of new people and racism is now not a big problem as it was before. I am happy where I am now as I am learning new ways to cope with my depression and I have close friends with whom I can always talk to and meet.

They have been very important by helping me to change for the better and told me "No matter what they say don't change who you are,” This could be said about anything, not only racism, and meeting them also helped me by assuring me that the four racist people from school were the minority and that the majority of people in Scotland are very friendly, kind and welcoming.

As Nelson Mandela rightly said "No one is born hating another person because of the colour of his skin, or his background, or his religion. People must learn to hate, and if they can learn to hate, they can be taught to love, for love comes more naturally to the human heart than its opposite".