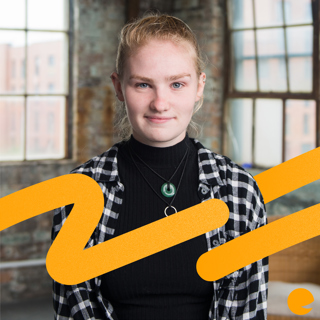 I used to be very angry about the way I had been treated.

But through a bit of maturity, a couple of good adults and so many experiences with See Me, I have realised that the way to tackle stigma and discrimination is through education. It has taken patience and a lot of effort to get through the hard times, but I am currently at a pretty stable point in my life and I’m finally ready to tell my story.

My mental health initially went downhill when I was in my second year of high school. I was struggling with friendships as I wanted to please everyone but hadn’t yet learnt how to stick up for myself.

I remember approaching my guidance teacher about this, to ask for some advice on switching between friendship groups without offending anyone. Speaking to her was the first time someone recognised that I was struggling with depression.

Initially she gave me a lot of support and arranged for me to see a counsellor in school.

I felt very ashamed about this and didn’t tell any of my friends that I was seeking support for my mental health.

Throughout my second year I continued to talk to the therapist who later referred me to CAMHS. Support from my guidance teacher started to decline and she would often say things like, ‘Oh it’s you again,’ making me less eager to seek support. This teacher often told me that I was ‘behaving like a little girl’ when distressed and that I was a burden to friends and teachers.

When I was in third year, I went on a school trip to an outdoor centre for a week. This was where I experienced my first psychotic episode. I had become separated from the group due to hearing voices. When the instructors came to get me, they were very angry and spent no time trying to understand what had happened and make sure that I was okay.

Later on, I overheard them talking about me around other students, which felt like a massive breach of trust. For something that was so upsetting for me, it was hard to hear them talking about it as if it was nothing and suggesting that I had done it deliberately.  If they had taken the time to understand from me what had happened, it could have been dealt with much better and I wouldn’t have felt so isolated.

Back at school, word got around, and teachers and other pupils began to treat me differently.

Namely my Duke of Edinburgh instructor, who was also a teacher at the school. He told me that he didn’t want me taking part in the expedition and didn’t even want me to go out on a day walk with the group. He provided no explanation for this and didn’t leave room for me to question his decision.

After conversations between my parents and the school asking for reasonable adjustments to be put in place so that I could complete the expedition, which was the final part of the award that I needed to do, I was told that this wasn’t possible. I was absolutely devastated about this decision, especially because it was at a point in my life where I needed something to be proud of and I needed to achieve something to prove to myself that I wasn’t defined by my struggles with mental health. Despite this, I managed to complete my Bronze DofE with an open award group and go on to do my Silver with the school and another teacher leading the group.

While being seen at CAMHS, I had several appointments to discuss being put on medication. I was very eager for this as I didn’t feel that talking therapies were particularly working for me. I saw the same psychiatrist twice who refused to give me medication because I was ‘too emotional’ but they didn’t explain themselves further. I now know that I had a right to understand the reasons behind the decision and to be listened to fairly. This has been particularly important to me recently as I have been diagnosed with bipolar disorder and I feel that the past years could have been a lot easier, and I could have been put on the right medication sooner if that psychiatrist had listened to my struggles and not dismissed me.

Since I was eight years old, I had been part of a samba drumming band. I loved every minute of it as it allowed you to get out any weekly frustrations in a healthy way, by hitting a drum. I gradually climbed through the ranks and got given the opportunity to conduct the band. This meant so much to me as I felt I had a purpose in the band and could share my enthusiasm with others. Although this wasn’t all singing and dancing.

The more the leaders found out about my mental health the more differently they treated me.

I suspect that due to the public perception of mental health, they stopped giving me roles to carry out as they thought I couldn’t handle it. Sometimes I would be allowed to lead and sometimes I was belittled and treated like a little kid. They may have been doing what they thought was best for me by giving me a break, but I was never included in the conversation. I was constantly swapping between being valued and important to being pushed to the side for no apparent reason, this made me very critical of myself and had a big impact on my self-esteem.

Although I have experienced stigma and discrimination from others, my life hasn’t been without self-stigma as well. When I went into S6, I was suddenly given a lot more responsibility around the school and this led to me voicing to my deputy head how I felt ‘too old’ to be struggling with my mental health, almost as if it was something that you grew out of. Of course, this is not the case, but I had got it in my head that I had to be responsible and not show ‘my weakness’.

I think, often, self-stigma is overlooked because it’s not a clear situation or comment that you can tackle, but it slowly tears you apart and makes you your own worst enemy. It often stops you getting the help you so desperately need.

I know my self-stigma has come from the other stigmatising circumstances, which often makes it even harder to overcome because your brain can convince you that someone else said it so it must be right. This is why I think the anti-stigma work that See Me is doing is so important as it is so easy to hold these opinions and not question what you think.

That’s why I don’t hate the people who have been stigmatising or discriminatory towards me. It’s just that they haven’t yet been made aware of mental health and the realities that holds. I am almost jealous of them because that means they haven’t been on the other side of it, and they haven’t battled their brain everyday like so many of us do.

I’ve talked a lot about the negative adults in my life and the impact that their behaviour has had on me, but my life hasn’t completely been without good adults. Namely my deputy head and a maths teacher at my school who both made it so clear that I was needed, valued, and appreciated. I’m not sure I can ever put into words what they have done for me or capture their unwavering support.

They made me feel safe and supported and even made me laugh when breathing seemed impossible.

They showed they genuinely cared every single step of the way. They never judged me, gave up or even been slightly frustrated. They never made me feel like a burden, even on days that they could have done without me knocking on their door. They let me sit with them for hours on end, distracting me with whatever chat they could muster up.

When I saw no way out, their confidence in me and optimism made it all seem bearable. They quietly kept me going and reminded me that whatever was going on, they were always there. They really were the support I needed when I needed it. They truly went above and beyond in every single way possible to help me. Looking back, it seems truly remarkable.