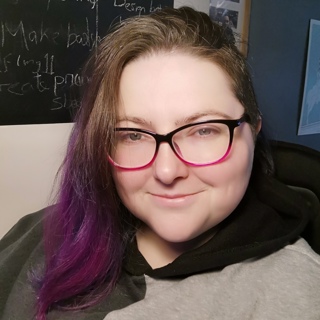 I've been trying to fight stigma for as long as I’ve been facing it.

I’m the chair of a mental health peer support group and I’m really passionate about making sure people have a support network, because I know how important that is from my own experiences.

I have some absolutely fantastic family members and friends who are extremely supportive. But I have also had family and friends be extremely dismissive. Some have asked me about stuff that they really should not have been asking me about. And it wasn't to offer help – it was because they were curious, I was the latest ‘weird thing’. Others have completely dismissed my mental health, and then when I got very ill, would say, “Just pick yourself up, stop complaining about it.” But that's not how mental illness works.

The area where I’ve experienced stigma and discrimination most is in employment – but I’ve had both ends of the spectrum.

Unfortunately, I did have to give up employment about eight, nine years ago due to my health – but that was my physical health which was getting worse, and that impacted my mental health. I didn't have the skills or the tools at the time to be able to balance it. But my working life was fantastic, and my employer was really supportive.

On the flipside, the place I was in before that was horrific. My manager was using my illness against me, and started putting me in situations she knew would burn me out deliberately, to get rid of me. The only evidence of that I had was after I left – a colleague showed me the text that she'd sent him detailing how she was going to get rid of me, and one of the things she’d said was she we would put me in situations that she knew would be dangerous for me and my mental health.

In healthcare too, I’ve seen stigma. I have a physical disability – I have EDS (Ehlers-Danlos syndrome) so if I wander in to A and E and my shoulder’s out of place, that’s not a problem at all. If I go in because I'm hallucinating, they don't know how to handle it and they don't know how severe it is.

There’s a gap in education and understanding around mental illness.

Any time I show up to minor injuries, there's a flag in my file to note that I have complex mental health. I always know when someone has seen it because some of them seem afraid of me, which is quite sad. I already have extreme guilt for what I have – I have psychosis and it's not a nice condition, some of the stuff is horrific. When I see somebody afraid of me, it feeds into this idea that I'm this violent person, I have this condition that makes me volatile. And it's a form of self-stigma that gets perpetuated.

I’ve held back from getting help with my mental health a few times, because I’m terrified that they’ll up my medication or do something else that means I can’t run my group, I can’t do the things that matter to me.

I wish people understood that there’s more to people than a diagnosis. People can be incredibly gifted at different things. In employment, there is a wealth of potential out there – if you are willing to make small concessions, you will get the best employees.