We have been working with Edinburgh based Polish charity Feniks to try to reduce the suicide rate for Polish men in Scotland.

We have been working with Feniks to look at reducing mental health stigma in discrimination for the Polish community in Scotland.

Over the years we have trained Polish Champions and ran our Pass the Badge campaign in Polish, translating the messages on the badges into Polish so they could be shared through the community.

Currently we are working with them on reducing the suicide rate of Polish men in Scotland, and finding ways to tackle the stigma that is stopping them for asking for help.

A report from Feniks and NHS Scotland in 2018 found that the level of suicides among the Polish men in Scotland was nearly twice as high as among the Scots (96% higher).

On July 23rd we held an event together, It's Okay to Talk, to launch Mental Health & Suicides Among Polish Men in Scotland, 2020, a report looking at what is contributing to the suicide rate, and what we can do to stop it. 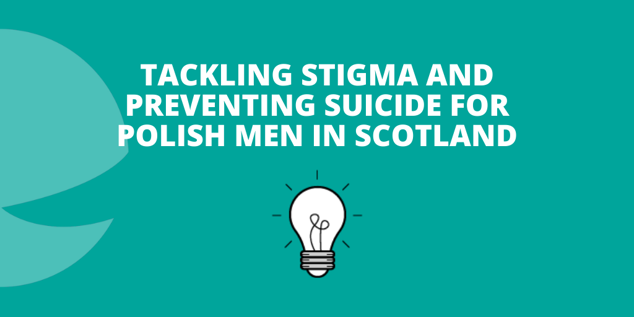 The report found Polish men living in Scotland don’t feel like they can talk about their feelings, which can lead to them turning to suicide.

From 173 men who answered the questionnaire 66% admitted they had suicidal thoughts and 24% attempted suicide.

Stigma plays a big role in Polish men not wanting to talk about their feelings, often they stigmatise themselves and don’t think they should reach out to others.

The most common reasons they can’t talk about how they’re feeling are loneliness, homesickness and difficulties in creating meaningful friendships with other men.

Socially, they don’t think they have anyone to talk to, there is a lack of opportunities to meet new people who might give help and support and there is toxic masculinity in males friend groups.

There are institutions barriers. A lack of understanding of the Scottish health care system is a big barrier to Polish men asking for help, they don’t know where to look or how to use it.

The report highlights some actions that could be taken to help change the current situation. If you think that you could be involved in the change, then let us know.